Death. A lot of death, you poor anime only watcher.

A reply to Manh Tuan Quach
1 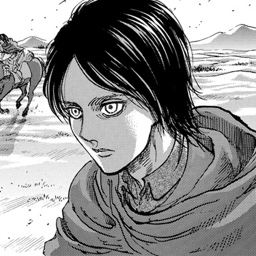 YD.Ann I like it how it is when he’s 16, but I’m still interested to see it animated

I couldn’t see Hajime killing Levi. If he did that, the fan base would be outraged and people (not me but some others) would stop reading SnK. Even after 115, I think Levi will (somehow) live.

I was starting to think Gabi turned good after 118, then she blows off Eren’s Head. She’s stupid though, because it’s not going to work. Eren had regenerative abilities.

Maybe I am Zac😶

I’d like like to explain the logical reason why Eren is not dead and take everyone’s emotions out of the equation. Eren is a *titan*. He possesses regenerative abilities. Yes, I know that it seems a little far fetched that Eren could regenerate his head, his brain, his neck., but didn’t Reiner do that? Are we all forgetting that it’s literally been accomplished?

Eren didn’t die. I will say that rn. He is a Titan so he can regenerate his limbs and stuff. You might think that his entire head is too much to regenerate but Reiner did it, sooooo...

Me. I think that Eren is okay though. He had regenerative abilities.

You got it bro!

Great! I’m glad that I could help!

If you read up on the Wiki about paths, it will explain to you that all predecessors of one of the nine titans will each have interlocking memories because all of the paths meet up at a single coordinate (the founding Titan). To make this a bit easier to understand, the founding Titan’s coordinate isn’t exactly a physical place but more of a psychological connection. It’s physical in a way that suggests it’s someplace in the distant Universe, or maybe another universe completely. It’s very hard to explain. Time passes differently at this coordinate as well. At the point of the founding Titan, eight other paths lead to it. These are for all of the eight other titans. The reason that Eren Kruger is able to see Eren Yeager’s memories is that, put simply, there is a place where all of the people who have and ever will be that specific Titan’s memories connect, and since Eren Yeager and Eren Kruger both have the same Titan their psychological deities are both able to subconsciously walk across that path and see their memories. Because on the path the beginning of it is in the oldest memories of the person who had that Titan, and the end is the memories of the last person who will have that Titan. Walking through a path is sort of like walking through time, and it intertwines with the theory that time is relative and that your future has already been predetermined for you, meaning there is a lack of free will. Make sense? I tried to explain as best as I could. I hope this helped!

^^You have to remember that Armin threw the first punch. Eren has even instructed everybody to keep their hands on the table.