Paradis Island (パラディ島 Paradi-tō?) was a massive island on which the three Walls were located,[5] and Eldia's last territory.[4] It was just off the coast of Marley and is surrounded by the ocean.[5] Marley used the island in the past as a dumping ground for its Eldian criminals, turning them into Pure Titans as punishment.[6] In this context, the island was often called "Heaven" (楽園 Rakuen?, also translated as "Utopia").[1][2]

By the year 851, the island had been cleared of Pure Titans thanks to the use of the Executioner from Hell devices, allowing its inhabitants to roam freely outside the Walls.[7][8]

Following Eren Yeager's initiation of the Rumbling, civilization advances on the island for several decades before it is eventually destroyed by war.[3]

Late into the history of the Eldian Empire, Karl Fritz, the 145th monarch of the Fritz family, chose to abandon the conflict over the Nine Titans between the subservient Eldian families on the continental mainland and moved the capital of Eldia to Paradis Island, a remote island at the time.[9] In the King's absence, the Great Titan War continued to cripple the Eldian Empire as the eight Titan families would engage in an endless cycle of conspiracy and betrayal.[10] As Eldia lost more and more territory to the Marleyans, the King gathered as many Eldians and members of the royal family as was possible before raising three Walls around their last piece of undisputed territory in the year 743. Sometime after the raising of the Walls, the new Marley government built a 30-meter border Wall along the southern shore of the island to prevent the Titans from escaping to the ocean.[11] To deal with Eldian criminals, Marley sends them to the island and turn them into Titans to wander outside the Walls for eternity.[6]

While it is unknown what area of Paradis Island the Walls raised by the First King stand on, it is evident that the central region of the Walls is at a higher elevation than the outermost territories. Some regions of the land are home to Titan Forests, where the trees are known to reach as high as 80 meters, possibly due to the unique content of the soil.[14] Paradis Island is also rich with various minerals and natural resources,[15] which made the land a valuable target for the people of Marley over eighty years after the end of the Great Titan War.[16]

Paradis Island hosts the Eldian refugees from the Great Titan War. Most of these Eldians are Subjects of Ymir, although those who are not live as nobles, except for the Ackermans.[17]

A son from the Shogun clan of Hizuru (that would later become the Azumabito family) was invited to stay on the island before the Eldian Empire fell to the Great Titan War.[18] These Asians became known as the Asian clan inside the Walls.

The Ackerman and Asian bloodlines are currently endangered on the island. Since they are not Subjects of Ymir, they could not be controlled by the Founding Titan; therefore, to protect the peace that those two clans disagreed with, the Crown exterminated them.[19] The only two remaining survivors are Levi Ackerman and Mikasa Ackerman, the latter also being the last Asian on the island (albeit only half). 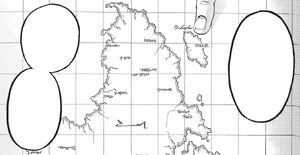 Marley and Paradis Island compared to Africa and Madagascar