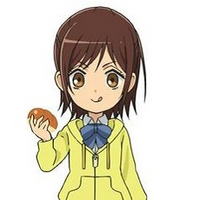 Sasha's appearance in the Attack on Titan: Junior High anime

Everyone notices the strange environment 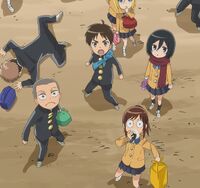 Upon seeing the Colossal Titan

Sasha struggles to swallow her food

Sasha eating ramen while the game is progressing

As Eren successfully balances himself

The disappointment in Eren's attempt

Sasha secretly munching while the test results are presented

Sasha is distracted by food thoughts

The group is alarmed by Annie's form of Titan communication

Sasha loses to Hange in the bread race

Bowing to the upperclassmen

The girls hear the bathroom ghost

Sasha still munching while everyone is terrified 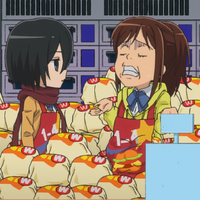 As teachers stand in their way

Chased down by Titans 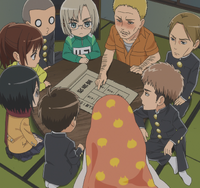 Listening to Hannes point the way to the principal's office

Official Characters for Attack on Titan: Junior High
Retrieved from "https://attackontitan.fandom.com/wiki/Sasha_Braus_(Junior_High_Anime)/Image_Gallery?oldid=263042"
Community content is available under CC-BY-SA unless otherwise noted.