This article is about the 53rd chapter of the Attack on Titan manga. For the tool the Survey Corps use most on expeditions, see signal flare.

Smoke Signal (狼煙 Noroshi?) is the 3rd chapter of the 13th volume and the 53rd chapter overall of the Attack on Titan manga, written and illustrated by Hajime Isayama.

As an imperfect Titan form of Eren falls to the ground, Mikasa and Hange are forced to remove Eren's body from the Titan by force. A day later, after Eren wakes up, not remembering anything, he is informed of the experiments' results, learning that he has shown no signs of the hardening ability and even lost his intelligence after mysteriously recalling about his father. After Levi describes their situation to be quite bleak and Hange suggests to focus on the Wallists, Eren suddenly witnesses an image of a girl, not knowing her identity or where the memories of her come from.

In the capital city, Mitras, Erwin rides a carriage along with Nile, when the former questions the latter about Nick's murder, much to the shock of the Military Police Brigade's Commander. It is revealed that the Interior Military Police is not directly under the Brigade's command. The two then recall their past as they talk about Nile's wife, Marie, and eventually Erwin's decision to choose Titans over her. Meanwhile, Levi's Squad receives their orders from Erwin and they eventually reach the Trost District. After Levi is confronted by several villagers, Eren and Historia end up being kidnapped. However, it is revealed that the two kidnapped are respectively Jean and Armin in disguise. Mikasa and Levi easily track the kidnappers' location and prepare to act, the latter ready for action with his foot injury feeling better.

As Mikasa and Armin ride their horses, Eren, in his Titan form falls down seemingly unable to move. From a near location, Hange is attempting to encourage Eren, but to no avail and after getting no response from him, Mikasa approaches him. Levi complains that she is not following the orders yet again, but Hange notes that they are done for now. As Hange attempts to remove Eren from the Titan's body, they notice that he is way more attached to it than before, to the point of fusing with it. Hange ponders about that and even has Moblit make a sketch of Eren's injured face when Mikasa cuts through the flesh to free Eren. The experiment ends as the entire squad withdraws, with Hange knowing that Eren's Titan transformation must have caught the attention of those watching them.

A day later, Eren finally wakes up. He does not seem to remember anything from the experiment and is upset to find out that there were no signs of the hardening ability. Hange explains that since Eren transformed without being able to employ the hardening ability, they decided to run intelligence and endurance tests. However, after one hour of simple test concerning movement, speech, and writing, Eren suddenly, after writing something about his father, became unable to perform the tasks and eventually left his Titan body. After thirty minutes of rest, he transformed again, however, this time his Titan form was only 13m tall, contrary to the usual 15m, and could not perform any of the intelligence tests. For the third time, the Titan was only 10m tall and was incomplete, with his human body being attached to it more firmly than before. Eren takes this news as a proof that the operation to retake Wall Maria cannot be performed at the moment.

Levi states that the situation is quite 'shitty' and although Mikasa tries to argue, claiming that Eren did his best, Levi says that he is not blaming Eren, but in spite of his effort, the situation is still the same. He describes living inside the Walls like garbage. Hange then attempts to translate Levi's words, saying that while they know that Eren cannot use the hardening ability, they at least learned his Titan's limits and still need to continue fighting. Eren is upset with all the burden put on him, not being sure whether he can pull it off. He wonders why he thought of his father during the experiment, when suddenly, he recalls an image of a girl brushing her hair in a richly decorated bedroom, but immediately forgets about her after seemingly getting a headache. Hange then states that they will focus on finding out the information that only the Wallists and the Reiss family seem to have access to.

In the capital city, Mitras, Erwin Smith and Nile Dok are riding a carriage. Erwin notices a band of child thieves, surprised that the capital city is in such a bad state and Nile notes that all the holding facilities are too full to take them in. The two briefly talk about their days in the Training Corps before Erwin asks whether Nile knew about the Military Police Brigade's Interior squad torturing and killing Minister Nick for information about Eren's whereabouts. Surprised, Nile gives a negative reply and then explains that the Interior squad's chain of command is different - they are basically free to do whatever they want. Erwin asks whether handing Eren over will solve the danger within Walls and when Nile does not give a direct answer, Erwin changes the topic of discussion and asks about Nile's wife, Marie. He mentions that Nile intended to join Survey Corps as well, but meeting Marie changed that. Erwin also notes that he was in love with Marie as well, but in the end chose Titans over her, with Nile mentioning that there must be something wrong with him to do that.

Meanwhile, the members of Squad Levi read instructions from Erwin, with apparent surprise. Levi tells them to follow him if they are stupid enough to believe in the Commander. Later, they watch as the place they were staying at is being searched by the Interior Military Police. Eventually, they arrive at Trost District and as they walk through the crowd, they are approached by people who blame Levi and the Survey Corps for losing jobs. They continue until Levi notices an incoming carriage and while he ends up restrained, the carriage seemingly kidnaps Eren and Historia. However, it is revealed that Eren and Historia are hiding in some other location while the kidnapped ones are Jean and Armin in disguise. At that time, Levi and his squad arrive, standing on top of the roof where the two are being held. Mikasa questions his injury and Levi states that his leg is moving pretty well. 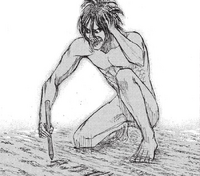