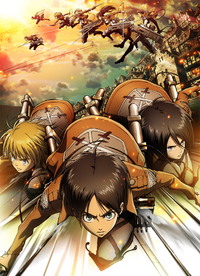 It's been 3 years since the first season of the Attack on Titan anime was released to tremendous success, and fans wait expectantly for the second season, confirmed since 2014. However, the wait is feeling unbearably long, and the impatience for news has led to the emergence of several rumors and lies that are being spread all over the Internet. As people frequently come to the wiki asking for the same information and spreading the same rumors again and again, I decided to write this post in the hopes to clarify once and for all the most common doubts about the upcoming season.

UPDATE MAY 8, 2016: A Spanish distributor has stated that Season 2 has been pushed back to 2017, according to information received from Kodansha. Both Kodansha and Wit Studio are yet to either confirm or deny this information.

Undoubtedly the most asked question, and very likely the reason why you are reading this. However, I have to disappoint you, because the answer is "we don't know". The producers haven't revealed a specific date yet; nevertheless, from the interviews given by Hajime Isayama and director Tetsuro Araki on this month's issue of Bessatsu Shōnen Magazine, and by Wit Studio's president George Wada on the Sakura-Con 2016, we know that the season is still under production, so a release during the Spring lineup can be discarded (no, it will not come out tomorrow April 16th as some rumors said), and we are more lining towards a Fall release around October.

In any case, I should note that we have a releases calendar here on this wiki, so as soon as a specific date is confirmed, you'll be able to see it there.

2. Which chapters will it adapt?

Season 2 will cover the events of the Clash of the Titans and Uprising arcs. How do we know that? Just do a simple math: the first season of 25 episodes adapted the first 34 chapters of the manga, so assuming that the second season would be of the same length, it will cover the next 34-36 chapters, until around chapter 70. That's the whole Clash of the Titans and Uprising arcs. In chapter 71 begins the current Return to Shiganshina arc which is still in progress and obviously cannot be adapted yet.

This is also consistent with the decision to schedule the season for a 2016 release, as the two arcs were recently completed at the middle of the last year, and the consequent work of adaptation would result in a premiere during this year.

Even more: this is just a personal guessing (and I don't consider it a spoiler, but you're warned), but we know that the first season saved the most shocking revelation from chapter 33 for the post credits scene, so it's very likely that that particular shocking revelation from the last pages of chapter 70 will also be saved for the after credits, laying the ground for the events of the following arc.

The main culprit is the monthly format of the series. The manga releases a new chapter every month, and if 34 chapters are needed to produce an anime season, that means the producers need to wait 34 months; i.e., around 3 years, to gather enough chapters to work with. That's why Season 2 is coming three years after Season 1.

However, this is not necessarily a bad thing. A monthly format means that Isayama has more time to work on each chapter and reduces the amount of filler material, resulting in the great quality characteristic of Attack on Titan. Personally, I prefer this monthly format to a weekly format that could lead to greater amounts of filler and an eventual drop of quality as I have experienced with other weekly mangas that I follow.

UPDATE JULY 3, 2016: Although the original scheduling for 2016 is attributable to the monthly format of the manga, the further delay to 2017 announced today by Wit Studio is not. This is most likely caused by the recent projects the anime studio has been working on, including the series Kabaneri of the Iron Fortress released this year.

4. Is it true that it was delayed until the manga is 4 arcs ahead?

Possibly the most stupid rumor that I've heard, and my answer would not only be "no", but I'd also ask, "why are they supposed to do that?". It makes sense to wait until the manga is 2 story arcs ahead if that's the number of chapters they need to produce the season, but to wait 4 arcs is a complete nonsense and has no practical purpose at all.

This rumor was apparently spread by a site called "Movie Pilot", which provided no source to support that claim and even pathetically refused to give one when asked, further confirming their lack thereof. In short, nothing worth to pay attention to (and a red alert about any future "news" that could come out from that site).

In fact, instead of coming from Isayama's word, I think that rumor may actually have something to do with information taken from this wiki but interpreted incorrectly. Considering how they talk about "four story arcs ahead of the anime" and "is currently only two story arcs ahead", it's evident that they are talking about the Story Arcs that we use on this wiki (some other sites even specifically cite them by name). Maybe someone came to the wiki and noticed that the first season of the anime indeed spanned 4 arcs (Fall of Shiganshina, 104th Training Corps, Battle of Trost District and Female Titan), and after that only two more arcs have been completed (Clash of the Titans and Uprising), so they concluded that the manga was just halfway to provide enough material for Season 2.

However, they never realized that those first 4 arcs were much shorter, and they spanned 34 chapters while the next two arcs span 36; so they roughly equal the length of the previous 4 combined. Also, since they are unofficial arcs made by the wiki community for organization purposes (there is a big notice on top of that article warning about it in case nobody saw it...), they obviously have no influence over Isayama or the anime production. What matters is the number of chapters and Wit Studio's schedule; and the first requirement is already fulfilled while the second is in progress.

5. Was the production of the season suspended?

Yes and no. This rumor was apparently originated from the aforementioned one and from a tweet by chief animation director and character designer Kyoji Asano on January 5, announcing that they were "getting back to work", leading to the misreading that the production had been in halt for some time. However, he was simply talking about getting back to work after the Christmas holidays. From the interviews previously mentioned, we know that the production is ongoing and in line to the schedule.

6. Is it true that it will deviate from the manga?

Another baseless rumor, and I should repeat my question: why are they supposed to do that? As it was pointed out, the long wait since the airing of Season 1 was because the producers wanted to gather enough material from the manga to adapt on Season 2, so if they wouldn't be planning to follow the manga, then they wouldn't have had to wait and could have released the season at any time they wanted (but it wouldn't be the Attack on Titan we're wanting to see).

Also, from the interview to Isayama and Araki on Bessatsu Shōnen it became clear that the production company is working very close to the AoT's creator to make a season as faithful as possible to the original series, with Isayama giving advices about the correct development of the story; so we can expect a season as close or even closer to the manga than the previous one.

It's obviously too early to know this for sure since we are still waiting for Season 2, but since the manga is still ongoing past the point where Season 2 will end, if the anime performs as well as the first season did, the possibilites for a Season 3 are very high.

We should remember that after the publication of volume 16, Isayama declared that the manga was "60% finished" at that point; and the last year his editor Kawakubo Shintaro estimated that there were "about three years worth of manga chapters left"; which is mathematically consistent with two arcs of 16-20 chapters (the same as the last two) counting the current Return to Shinganshina arc, an ending in 2018 around chapter 102-110, and giving the exact amount of material needed for a third season.

The bad news are, naturally, that it would be coming out three years after Season 2, in 2019 or more likely 2020; but that's something to worry about later.

This is potential spoiler so you can skip this point if you want. If you follow the manga you'd have already deduced the truth from the previous points, but the short answer would be: no. As of the end of The Uprising arc, Levi was alive; and as of the latest chapter released the last Friday, he was still alive, so he will certainly stay alive for the entirety of Season 2. We don't know what will happen in the following chapters, but as far as to the upcoming season concerns, Levi will not die (if you want to know if some other characters will die, consult their respective articles on this wiki).

Bonus: This is old news, but if you haven't seen it yet, you wouldn't like to miss it. Check out this Season 2 preview included at the end of the second recap movie:

UPDATE: Check out this second preview as well, a scene adapted from Chapter 44:

I hope this helped clarify your doubts about the upcoming season. Stay tuned to our Facebook page and to the releases calendar for more news about the anime and everything related to the Attack on Titan universe.

Retrieved from "https://attackontitan.fandom.com/wiki/User_blog:Manuel_de_la_Fuente/Attack_on_Titan_Season_2:_release_date,_facts,_rumors,_and_everything_we_know_so_far?oldid=129333"
Community content is available under CC-BY-SA unless otherwise noted.