I've seen so many Marco-related theories on Shingeki no Kyojin tumblrs, and all of them are pretty interesting! I decided to write a really long post on observations/evidence from both sides of the theory. I'm not necessarily trying to prove whether Marco is alive or dead, I'm simply gathering observations made from a bunch of websites and putting them together so you can ponder over it too :)

As shown by the images below from both the manga and the anime, Marco Bott and Samuel Linke-Jackson look extremely similar in facial structure, hair color, and hair style. Three key differences that will be discussed later, however, are eye color, freckles, and clothing.

Yet another Marco look-alike is the Garrison soldier (image on right) who first appears with Anka as Dot Pixis' escort on top of the Trost wall during Armin 's explanation of the operation to plug the breach using Eren 's newly found titan power [1]. In the anime, he is given the name Gustav and an appearance that no longer resembles Marco. This, and the fact that he is a member of the Garrison , puts this theory below the previous one in importance and likelihood.

Using the observations above, many theories have been formed that the corpse Jean finds is not Marco's, but someone else's, mainly Samuel's.

Observations Against This Theory

This observation is based purely on the anime. Frame-by-frame screenshots of Gunther's killer can be found on this Imgur album.

The unknown, hooded figure is widely accepted to be Annie. However, closer inspection of the figure proves otherwise.

Observations Against This Theory

Miscellaneous Evidence Against This Theory

Translation of image on left:

"--How do you feel when a character dies?

...Let's see. In the first place, the characters who appeared in Volume 1 were originally created with the intention to kill them off eventually so it's like aah, it's time for them to fulfill their role... Something like that. The reason there's a gap between what the person drawing is feeling and the people reading are feeling is because I'm the one bringing the characters to life from white paper so in the end, I just feel like they're drawings I've drawn on aper. So, that's why I'm able to kill characters that I had planned on killing without any hesitation... By the way, Marco wasn't really supposed to die yet (death in Volume 4), but because his character didn't stand out, I had him die sooner."

I told him “I love Marco. I was really happy to see him in the Volume 11 flashback.”, then Isayama-sensei said that Marco will have appearances in the future..!! (Probably a flashback?) Hooray for Marco fans..! (Emotional)

Staff: If Marco appears, will he be a zombie? lol
Me: !?
Isayama: Marco might just be a Titan, you know?

Normally, when a character dies in the manga, their bio sheet picture (at the beginning of each manga) is shown in the following volume with an X. Then, in all volumes afterward, their picture is removed entirely. But guess what? Marco's picture keeps showing up in every manga, with an X. Either Isayama is playing around with our imagination to keep us in suspense, or he's hinting at something. [6] 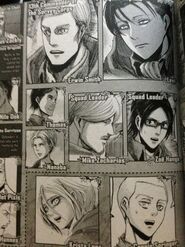 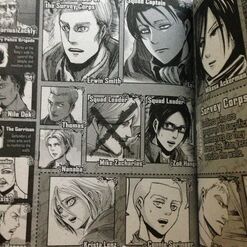 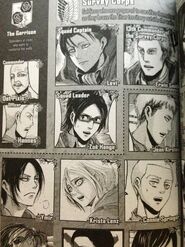 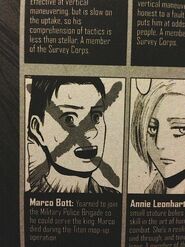 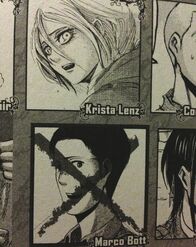 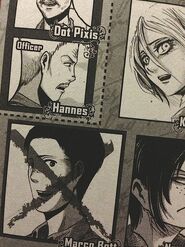 Image from Tumblr
Add a photo to this gallery

Also, Marco repeatedly is grouped with RBA (Reiner, Bertholt, Annie), the other Titan shifters, in the manga[7]

The GIF, supposedly showing the leg of Marco's corpse moving in the anime, has been announced to be a fake by the person who edited it [8].

His leg does not move in the anime.