View source
watch 01:55
Cobra Kai Season 4 - The Loop
Do you like this video?
Play Sound

This article is about the 38th chapter of the Attack on Titan manga. For the location, see Utgard Castle.

Clash of the Titans arc

Utgard Castle (ウトガルド城 Utogarudo-jō?) is the 4th and final chapter of the 9th volume and the 38th chapter overall of the Attack on Titan manga, written and illustrated by Hajime Isayama.

Connie is seen standing outside of his house in his home village. There is a Titan laying in his now crushed house staring at him while he grieves. They begin to leave for Utgard Castle with his Survey Corps squad when he hears the Titan in his house speak to him, saying "Welc...ome...home..." but before he can draw attention to it Reiner urges him to hurry up. At Wall Rose, Kitz Weilman's squad is shooting Titans with cannons while Rico Brzenska kills them. Nanaba and Gelgar's squads have not found any breaches in the Wall and after the search they take shelter in Utgard Castle. As the soldiers rest, Krista begins to speculate the nature of the Titans and when Connie speaks of the Titan in his house resembling his mother he is loudly dismissed by Ymir. Later, Ymir is seen searching for food when Reiner finds her and asks her what she is doing. As their conversation goes on, it is interrupted when Lynne tells the troops that Titans are swarming the castle. The Beast Titan is seen in the distance climbing the Wall and as the only equipped soldiers, Nanaba, Gelgar, Henning, and Lynne engage them. Hange's squad is seen elsewhere as Hange states that they are going to head toward Utgard Castle, unknowing of the attack.

Investigating the ruins of Ragako, Connie stands in tears by his house, destroyed by a strange Titan lying immobile on top of it. Reiner asks if he found any survivors, and Connie says that he has not. Reiner comforts Connie while Gelgar becomes suspicious of the scene. Despite the wreckage, there are no bodies or blood to be found, and the horses are still in the stable. Lynne, attempting to comfort the recruits, suggests that the town was safely evacuated. As they prepare to leave to investigate the Wall itself, the Titan on Connie's house speaks out to him, "Welc...ome...home...". Before Connie can stay and investigate, Reiner urges him to keep riding, ignoring his comments on the Titan's speech.

Nine hours after the Titans were spotted, at the eastern line of defense at Wall Rose, Kitz Weilman and his squad, which included Rico Brzenska, defend against the Titans inside the Wall. Elsewhere at that time, Garrison troops led by Captain Hannes ride alongside Wall Rose, searching for any signs of a breach.

Eleven hours after the Titans were spotted, the teams led by Nanaba and Gelgar find no breach in the Wall to explain the sudden appearance of the Titans. After sharing what information they could gather, they decide to rest at Utgard Castle a short distance away for the night. They arrive to find some signs of previous occupation, speculating that some hooligans must have used it as a hideout.

As the night drags on, Krista begins to speculate on the true nature of the Titans' appearance within the Wall. Gelgar orders everyone to get some rest instead of worrying, saying that they will investigate more in the morning. The topic of conversation shifts to Connie's home village. He uneasily repeats his connection between the immobile Titan and his mother, but Reiner Braun quickly dismisses the theory. Ymir immediately begins to mock Connie for his height, and the serious tone of the discussion dissipates.

Later in the night, Reiner comes across Ymir searching for something to eat. He commends her for making Connie drop the subject and requests that she continue so that he does not worry about his family. Ymir complains about finding a can of herring and hands the can to Reiner. He examines the can, commenting aloud on Ymir's ability to read the seemingly indecipherable characters on the label. Just as Ymir turns to confront him, Lynne orders everyone up to the roof. The clouds have cleared and the castle is overrun with Titans. The Beast Titan passes nearby, heading for the Wall, but the troops are forced to focus on the imminent attack on the castle. Nanaba takes charge and leaps from the tower to fight the Titans, accompanied by Gelgar, Henning, and Lynne, being the only other soldiers who have their vertical maneuvering equipment. The Beast Titan then climbs Wall Rose and observes the battle from afar.

Seventeen hours after the Titan sighting, Hange Zoë's squad heads towards Utgard Castle, unaware of the battle that is taking place. 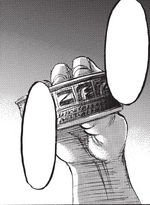