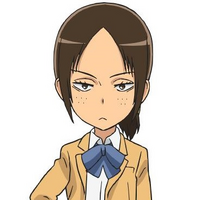 Ymir's appearance in the Attack on Titan: Junior High anime

Ymir recovers Christa from her fall

Ymir is wary of the strange environment

Admitted into the Scouts club

As Annie is asked about her favorite lunch

Fighting over Jean in his imagination

Ymir clings to Christa as everyone gets scared

As Reiner plans with Bertholdt

Official characters for Attack on Titan: Junior High
Retrieved from "https://attackontitan.fandom.com/wiki/Ymir_(Junior_High_Anime)/Image_Gallery?oldid=263573"
Community content is available under CC-BY-SA unless otherwise noted.